This photo is of 2016 of Riya and Shovik. Shovik was also a partner in Sushant’s two companies.

The case of Sushant’s death has now reached the angle of drugs. Riya Chakraborty and his family seem to be stuck in the case of drugs. Riya and her brother Shovik have also been exposed to some chats related to the drug trade and the purchase of drugs by the son for his father. Meanwhile, Dainik Bhaskar has some chat records of Shovik Chakraborty on October 10, 2019, in which he is talking to his friend about drugs.

In this chat on October 10, Shovik asks his friend for drugs and gives him the number of 5 drug sellers. In the chat, Shovik’s friend is asking him about drugs like ‘Weed’, ‘Hash’, ‘Bud’. Shovik gives his friend Zaid and Basit’s number for drugs named ‘Bud’. It is believed that the team of Narcotics Control Bureau arrested Zaid and Basit on the basis of these chats in the last two days.

Among the chats that have come out, Shovik also gives the number of someone named Karamjit and Raj along with Suryadeep’s reference. Shovik says that he can get ‘Ganja’ from them. These chats reveal the connection of drugs between Zaid, Abdul Basit and Suryadeep. It can also be assumed that NCB can interrogate Shovik soon on the chat. 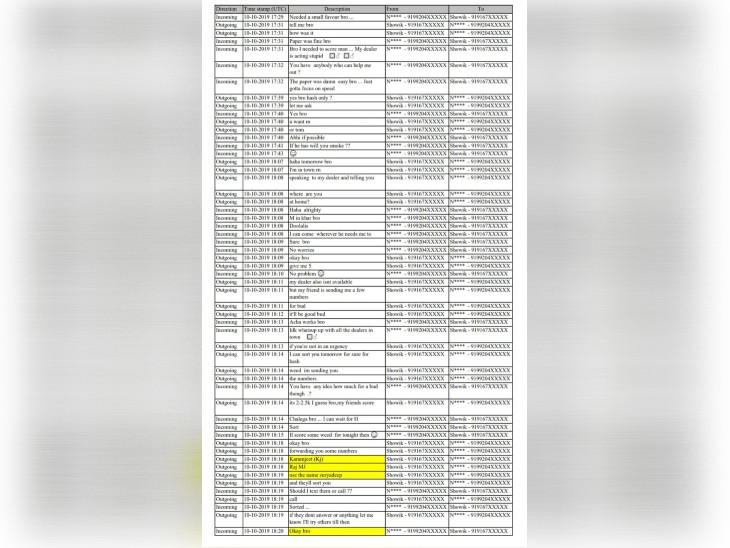 Conversation between Shovik and his friend:

Shovik: Bol bro, how was it?

Dude: The paper was good.

From here the drug conversation starts between the two

Dude: Brother I want it right now man, my dealer is pretending. The paper was good bro, just have to pay attention to speed.

Shovik: Need for today or tomorrow?

Dude: I will blow them together if found now. (This proves that Shovik also used drugs)

Shovik: Tomorrow brother, I’m in town right now. I speak to my dealer and tell. Where is it now, at home?

Dude: Okay brother, I am in Khar, where he says, I will leave. There is no problem.

Shovik: Okay brother, give me 5 minutes.

Shovik: My dealer is not present at the moment. But, a friend of mine is sending me some numbers. Will ‘Bud’ be of good quality?

Dude: Brother. I don’t know what is going on with these dealers in the town.

Shovik: If it’s not early, I’ll bring you a good hash tomorrow. Right now I am sending the number of the ‘Ganja’ one.

Shovik: Okay brother, I’m sending some numbers. (Shovik then sends the number of five to his friend. These include Zaid and Abdul Basit. He also tells his friend the code word to take drugs.)

Friend: May I call him or message?

Shovik: Call, tell me if these two don’t pick up the phone, I still talk to some other people.

Shovik: Asking them about hashes.

Shortly after this, Shovik’s friend writes. 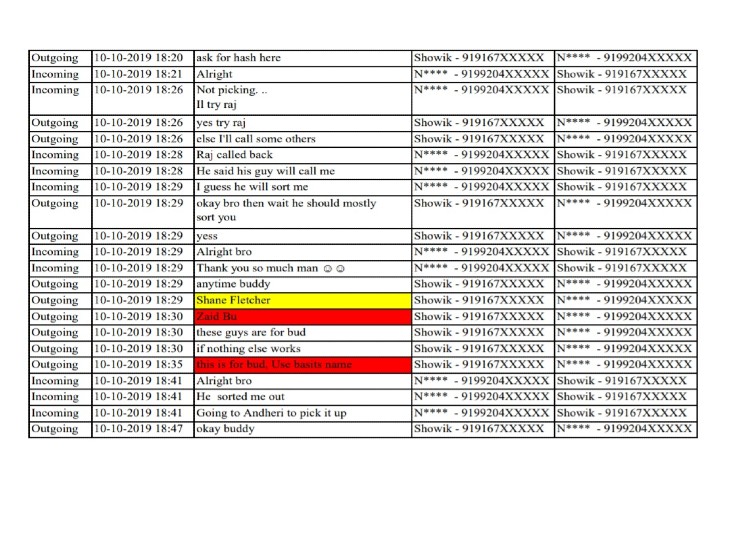 Dude: Well, the first one is not picking up the phone, I call Raj.

Shovik: Talk to Raj, or else talk to someone else.

Friend: Raj calls back, he is sending someone. Maybe work will be done.

Shovik: Yes brother will become work. Raj will deliver the goods to you.

Dude: Okay brother, he gave me the goods, I’m going to Andheri. Pick up the goods

Zaid Vilatra sent to custody by 9 September
Meanwhile, Zaid Vilatra, arrested on drugs connection, was produced in court on Thursday. The Narcotics Control Bureau (NCB) sought a 10-day remand from the court. After which the court remanded Zaid by 9 September. Significantly, on September 1, NCB arrested Zaid Vilatra from Mumbai.

The NCB has also arrested Abdul Basit Parihar in the drugs case. According to NCB sources, Basit and Zaid are also related to Samuel Miranda, an associate of Sushant’s girlfriend Riya Chakraborty.

Riya’s father was aware of taking drugs
Ashok Saraogi, a lawyer for Sushant’s former manager Shruti Modi, said his father Inderjeet was aware of Riya and Shovik taking drugs. They knew very well what their children were doing.

Popular singer Umair Awan is known for his Journey, Words and Actions loaded with inspiration.

Adyywood– The advertising and event management agency breaking the stereotype of the digital realm.

Recommendation to extend the time limit in two doses of covishield vaccine, no change in dose of covaxin

The government panel has recommended a 12 to 16 week gap between the two doses of Covid-19 vaccine covishield being put in place to prevent the corona epidemic. It has been recommended by the National Technical Advisory Group on Immunization. However, the group has not felt any need to increase the interval of two doses of covaxine. Such a recommendation, like a panel of the government, came at a time when a new study had claimed that if the gap between the two doses of the Covid-19 vaccine was increased, the deaths could be higher. Can also be reduced.

According to a Reuters news, it was said that it would be effective only when the conditions were favorable. Let me tell you that in the past, India had increased the gap in two doses of vaccine to prevent Covid-19. Now once again, the talk of increasing the gap of this dose is in full swing in the world. Britain has decided to make a 12-week gap between the two dosages here. It has been said in the news that after the first dose of Corona Vaccine, there has been a reduction of about 80 percent of the deaths. Apart from this, the pace of infection has also come down by about 70 percent.

According to the Reuters news, the Pfizer company also says that the effect of extending the time limit between two doses can also be seen on people under 65 years of age. The company has also made it clear that it is very important to have some favorable conditions for its very results. However, the company has made it clear that they do not have any concrete evidence nor data at this time. This is the reason why Pfizer is saying this based on the news coming from Britain.

The lockdown is also impacting the rail operations. Many long distance trains including Shatabdi Express and Rajdhani Express have been canceled due to lack of passengers. With this, the movement of local trains is also being disrupted. Many local trains running between different cities of Delhi to Uttar Pradesh will be canceled. This will cause problems to the employees and others traveling on these trains.

People will have trouble

Old Delhi-Tundla MEMU Special (04184/04183), Old Delhi-Hathras Fort MEMU Special (04418/04417), New Delhi-Aligarh MEMU Special (04414/04413) Ghaziabad-Mathura EMU Special (04420/04419) till May 17 Decided not to run or have. Railway officials say that Uttar Pradesh has a lockdown till May 17, so it has decided to cancel the said trains. The problem of government employees traveling by these trains has increased. Along with this, those traveling for treatment and other important work will also have problems.

Due to Corona, passengers are getting

There is a shortage of passengers in trains due to Corona infection and lockdown. Recently, Northern Railway had announced the cancellation of 28 trains till further orders. Many trains going to Mumbai have been canceled, despite the seats available in the running trains. On Tuesday, around three and a half hundred seats are vacant in the third AC of the special capital going to Maharaja Chhatrapati Shivaji Terminal.

Until a few days ago almost all trains to Bengal were running full, but now the situation has changed. On Monday, nearly four hundred seats in Sealdah Duronto were left vacant. At the same time, three and a half seats are vacant in the Sealdah AC special leaving on Tuesday. Explain that the lockdown has been carried forward in Delhi as well as in Haryana and UP. Now a lockdown has been imposed in these states for up to 17 May. Due to this, people are staying at home and are avoiding getting out. Due to which the trains are reducing congestion.

Article Name
After Rajdhani Shatabdi, railways cancelled many trains of Uttar Pradesh, see full list here
Description
Indian Railway News Many local trains running between different cities of Delhi to Uttar Pradesh will be cancelled. Due to this, the employees and other people traveling by these trains will have to face trouble.
Author
Desk
Publisher Name
Bollydad
Publisher Logo

Delhi Metro closed as well; RT-PCR report mandatory for entry into Uttarakhand; Know the state of other states

Lockdown, curfew and stringent restrictions have been imposed in many states of the country to curb the corona virus infection. In many states including Delhi, UP, the restrictions have been extended till May 17. Corona’s negative report has been made mandatory to enter several states. Explain that 3,66,161 new cases of Corona virus infection have been reported in the country in the last 24 hours and 3754 people died during this period. The total number of positive cases in the country has increased to 2,26,62,575.

Lockdown in Delhi and tough

The lockdown has been tightened in view of the increasing cases of corona in Delhi. The metro has been closed from May 10 to May 16 in Delhi. At the same time, marriage has been banned in a public place, marriage home, banquet hall or hotel etc., but marriage will be possible in the home or court. In which only 20 people will be involved

The Uttarakhand government has now decided to impose strict Kovid curfew in the state in the first phase from Monday to May 18 at 6 am. During this time, fruit-vegetable, meat-fish and milk shops will open from seven to 10 in the morning. In case of groceries, it has been decided to keep it open till one o’clock on Monday. After this, these shops will open on May 14 from seven to 12 in the morning. For those coming to Uttarakhand from other states, registration in the smart city portal and a negative report of RTPCR up to 72 hours ago has been made mandatory. Public vehicles will run with 50 percent capacity in inter-state and inter-district transport.

In view of increasing cases of corona, partial corona curfew has been extended till May 17 in the state. However, during the Corona curfew in Uttar Pradesh, people witnessed a large crowd at the fruit and vegetable market of Varanasi. During this time people were seen violating the rules of social distance.

A two-week complete lockdown has been done in Tamil Nadu from today. The cases of corona infection are increasing rapidly in the state, in which the government had to take this decision. However, essential goods shops will remain open during this period. Bengaluru will also have a 14-day lockdown from today. At least 26 states and union territories of the country including Uttar Pradesh, Delhi, Haryana, Maharashtra have also imposed strict restrictions like lockdown, curfew and lockdown to break the corona infection chain. In Jammu and Kashmir too, the ‘Corona Curfew’ has been extended till 17 May due to the severity of the epidemic.