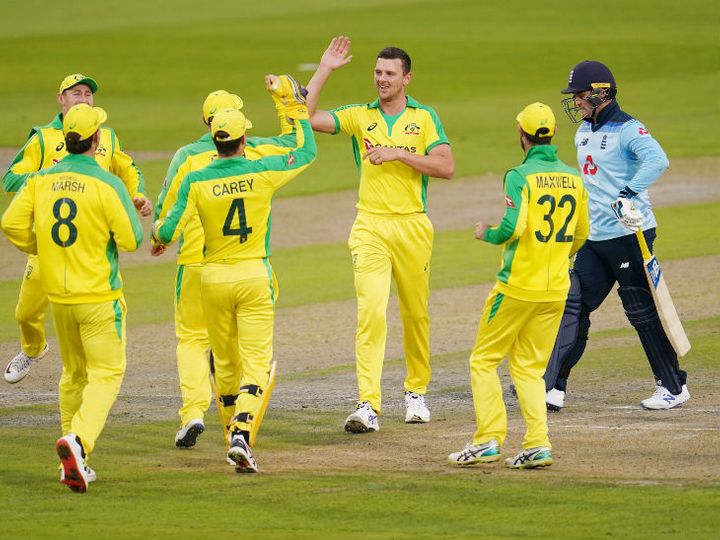 The first match of the three ODIs between England and Australia is being played at Manchester's Old Trafford ground. Batting first after losing the toss, Australia scored 294 for 9 wickets in 50 overs. England also did not have a good start in response. The team lost 4 wickets for 57 runs. First Josh Hazlewood dismissed Jason Roy (3) and then Joe Root (1). At the moment, Johnny Bairstow and Sam Billings are at the crease.

Australia's Adam Jampa also sent 2 players to the pavilion. He had captain Eoin Morgan (23) caught by Glenn Maxwell and then Jose Butler (1) at the hands of Marnus Labushane.

Even Warner and Finch could not show amazing

Earlier the start for Australia was very bad. Opener David Warner 6 and captain Aaron Finch were out early by scoring 16 runs. Marnus Labushane could not do well either and returned to the pavilion for 21 runs.

This was followed by Marcus Stoinis (43), Mitchell Marsh (73) and Glenn Maxwell (77). Marsh scored his ODI career 12th and Maxwell 20th. The two shared a 126-run partnership for the sixth wicket. At the same time, England's Joffra Archer and Mark Wood took 3-3 wickets. Adil Rashid got 2 and Chris Woakes got 1 wicket.

Hoping for a third consecutive series win against Australia

England also have a chance to win the ODI series after defeating Australia 2–1 in the T20 series. If the England team manages to win this series, it will be their third consecutive series win against Australia.

Smith did not play the first match due to a head injury.
The Australian team has landed in the match without Steve Smith. Smith was hit on the head during practice. For this reason, Australia did not feed the first ODI as a precaution. However, it is not yet decided whether Smith will play the next match. If they do not fit, they can be replaced as a concession substrate.

Australia did not win the series for 5 years from England

At the same time, Australia will descend from the host team with the intention of winning the series after 5 years. The last time Australia beat England 3–2 in a 5 ODI series at home was in September 2015. After this, there were two one-day series between the two teams and Australia suffered defeat in both.

Three ODIs at the same venue after 41 years

Apart from the 14-man squad for the ODI series, the England Cricket Board has appointed three players as reserve players. It also includes David Malan. Malan had a brilliant performance in T20 cricket for England. On his own, he became the number-1 batsman in the ICC T20 rankings. Australian fast bowler Josh Hazlewood believes the Kangaroo team have regained the momentum after their last T20 win. This will benefit them in the ODI series.

Australia won 2 matches out of 7 since World Cup

Australia's record in ODIs has not been good since the 2019 World Cup. He has won only 2 out of 7 matches since the tournament. It has its third worst winning percentage among 14 teams playing five or more matches during this period.