Kangna said- voted Shiv Sena in compulsion; The truth is that in the seat where Kangana votes, Shiv Sena did not fight 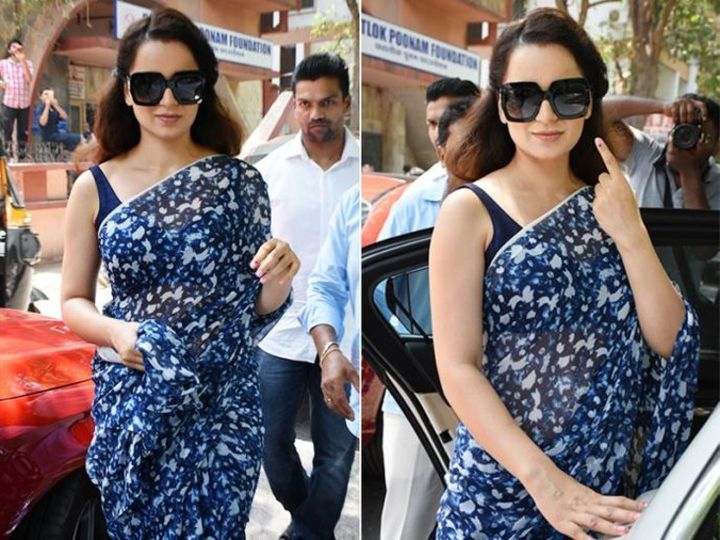 This picture is of April 2019 when actress Kangana Ranot walked out of a school in Bandra by casting her vote.

Kangana Ranot said in an interview to a news channel that I had to vote for the Shiv Sena in a compulsion because of the alliance in Mumbai elections. I am a BJP supporter and when I was looking for the BJP button in the voting machine, I was told that the Shiv Sena button has to be pressed. But when Bhaskar investigated Kangana's statement, it was found that his statement was false.

What did Kangana say?
In an interview with Times Now channel, Kangana said- When I went to vote in Bandra, I went in front of the voting machine. I am a BJP supporter and I was wondering where the BJP button is. Then I had to press the Shiv Sena button. Then I said that when I want to vote for BJP. I do not understand politics. I do not experience this. I don't know why this alliance happened, but it happened. And, I was forced to press the Shiv Sena button because there was no BJP option. Due to their alliance there was only and only Shiv Sena for that area. So I voted for him and see how he treated me.

2. Under the alliance, the Bandra West and Mumbai North-Central seats in the Assembly and Lok Sabha came to the BJP's account. That is, the Shiv Sena candidate has not landed in 5 elections. In such a situation, how can there be a compulsion to vote for Shiv Sena in front of Kangana?

3. Shiv Sena and BJP candidates were face to face in 2014 assembly elections. In such a situation, there was also an option of BJP in front of Kangana to vote, not just compulsion to vote for Shiv Sena.

How did Kangana react when the statement proved to be false?
On Bhaskar's news, Kangana replied that he voted for the Shiv Sena leader at the BPM school in Khar West. Stop spreading fake news.

Kangana came to stay in Khar West after 2012
Kangana's flat is in the DB Orchid Breeze building on 16th Road in Khar West, Mumbai. Construction of the building began in 2008 and the owners of the flat were given possession in 2012. The address of this apartment is registered on Kangana's Voter ID. This proves that Kangana has come here only after 2012. This region of Khar West is in the Bandra West Assembly and in the Mumbai North-Central Lok Sabha constituency.