Kings XI Punjab have won their first match in the last three seasons of IPL. In such a situation, the team would like to maintain its record.

The second match of the 13th season of IPL will be played between Kings XI Punjab and Delhi Capitals in Dubai today. In the UAE, the Punjab team has not lost a single match so far. The team won all 5 matches here in 2014. Also Punjab has won their first match in the last three seasons. In such a situation, the team would like to maintain its record. Meanwhile, Delhi fast bowler Ishant Sharma was injured during practice on Saturday. Their decision on playing will be made before the match.

However, this time the Delhi Capitals adorned with the best spinners may be overshadowed. The team has veteran spinners like veteran Ravichandran Ashwin, Amit Mishra and Akshar Patel. They will get a lot of help on the slow pitch and on their own, Delhi will also try their best to win their first title this time. Ashwin was the captain of Punjab team last time.

Delhi's poor record in UAE
South Africa in the IPL 2009 and the first 20 matches of the 2014 season were held in the UAE due to the Lok Sabha elections. Delhi's record in the UAE was very poor then. The team then won 2 out of 5 matches here and lost 3.

These records will be monitored

Head-to-head
The Punjab team has won the maximum 14 matches in the IPL against Delhi itself. So far 24 matches have been played between the two. Delhi has won 10 matches. Last season, both of them won one match each.

Pitch and Weather Report: The sky will remain clear during the match in Dubai. The temperature is likely to be between 28 and 37 degrees Celsius. The pitch can help the batsmen. Being a slow wicket here will also help the spinners a lot. The team that wins the toss will like to bat first. The success rate of the first batting team in the last 61 T20s here is 55.74%.

Delhi is the only team that has not played the final so far
Both Punjab and Delhi are yet to win the league title. The Punjab team, owned by Bollywood actress Preity Zinta, has been able to play the finals only once in 2014 and once in the semi-finals in 2008. At the same time, Delhi is the only team that could not play the final till now. However, Delhi reached the semi-finals in the tournament's opening two seasons (2008, 2009).

Gayle, Rahul and Maxwell have important responsibility in Punjab
This time in the Punjab team, along with new captain Lokesh Rahul, the most experienced veteran Chris Gayle of the West Indies and Australian all-rounder Glenn Maxwell will have the responsibility on their shoulders. Gayle has scored 326 sixes and the most 6 centuries in the history of the league. In the bowling department, Mohammed Shami and Sheldon Cottrell will play important roles for the team.

Young players will be duped in Delhi
In Delhi Capitals, it will be the responsibility of the young players to win their team. Young batsmen like captain Shreyas Iyer, Rishabh Pant and Prithvi Shaw are key players in the team. Apart from this, experienced players like Shikhar Dhawan, Ajinkya Rahane and Ashwin will also strengthen the team. 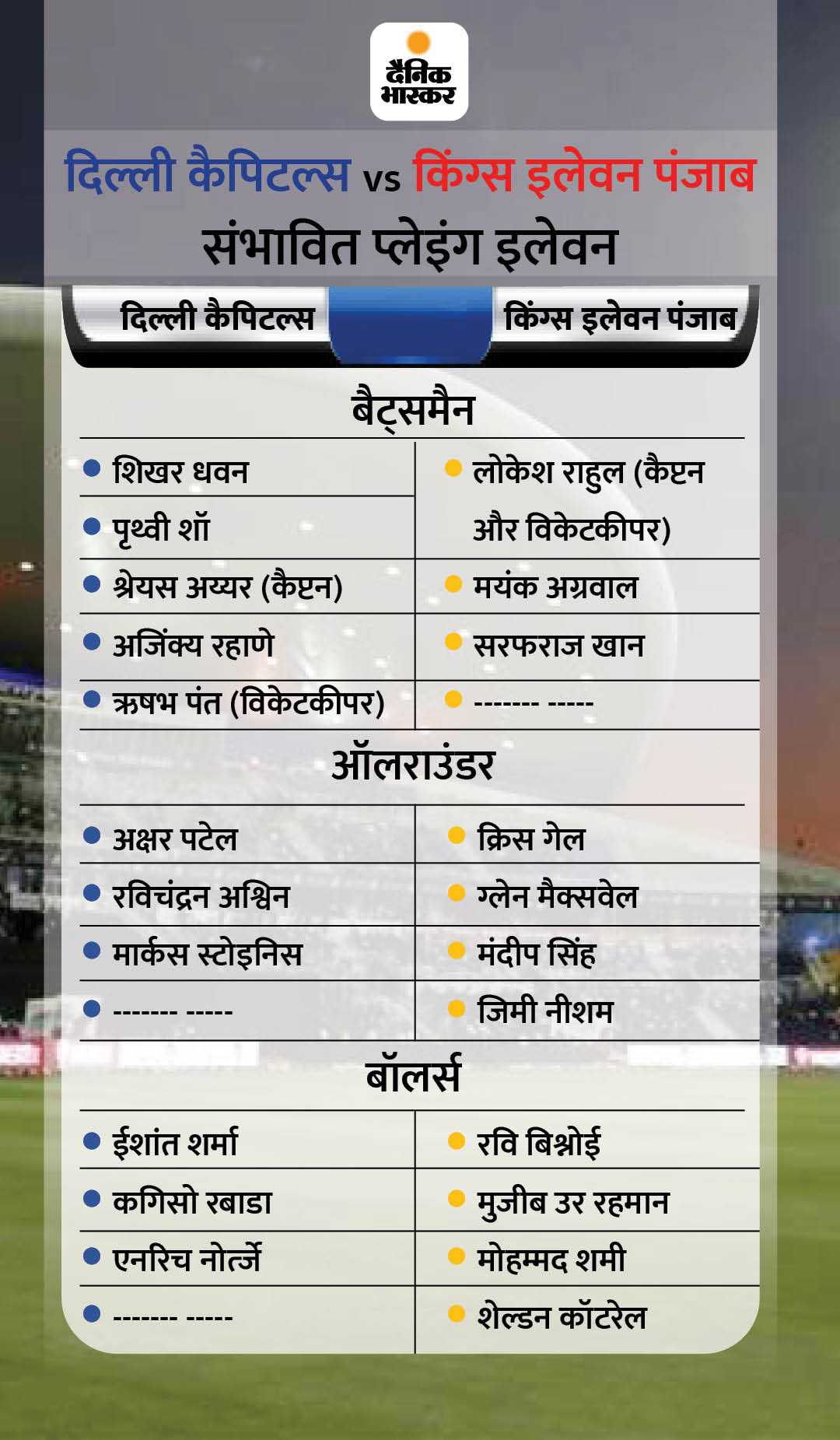