Kohli the fourth captain to win 50 matches to the same team in the IPL; Chahal, hero of victory, dismissed 3 players including Bairstow 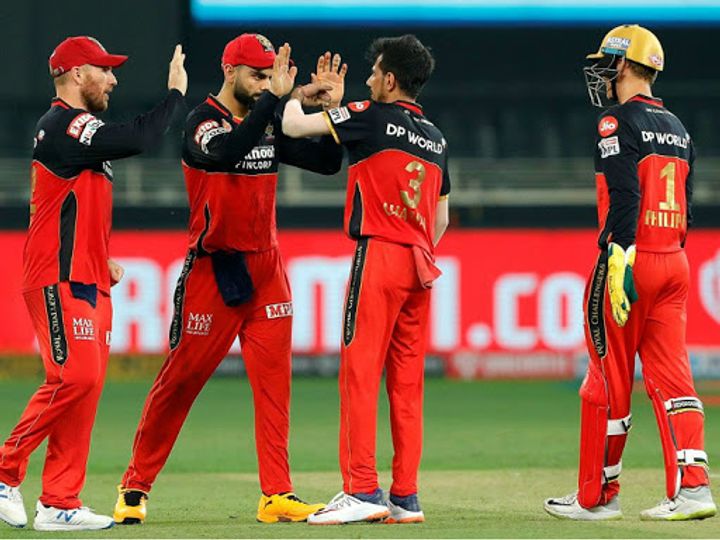 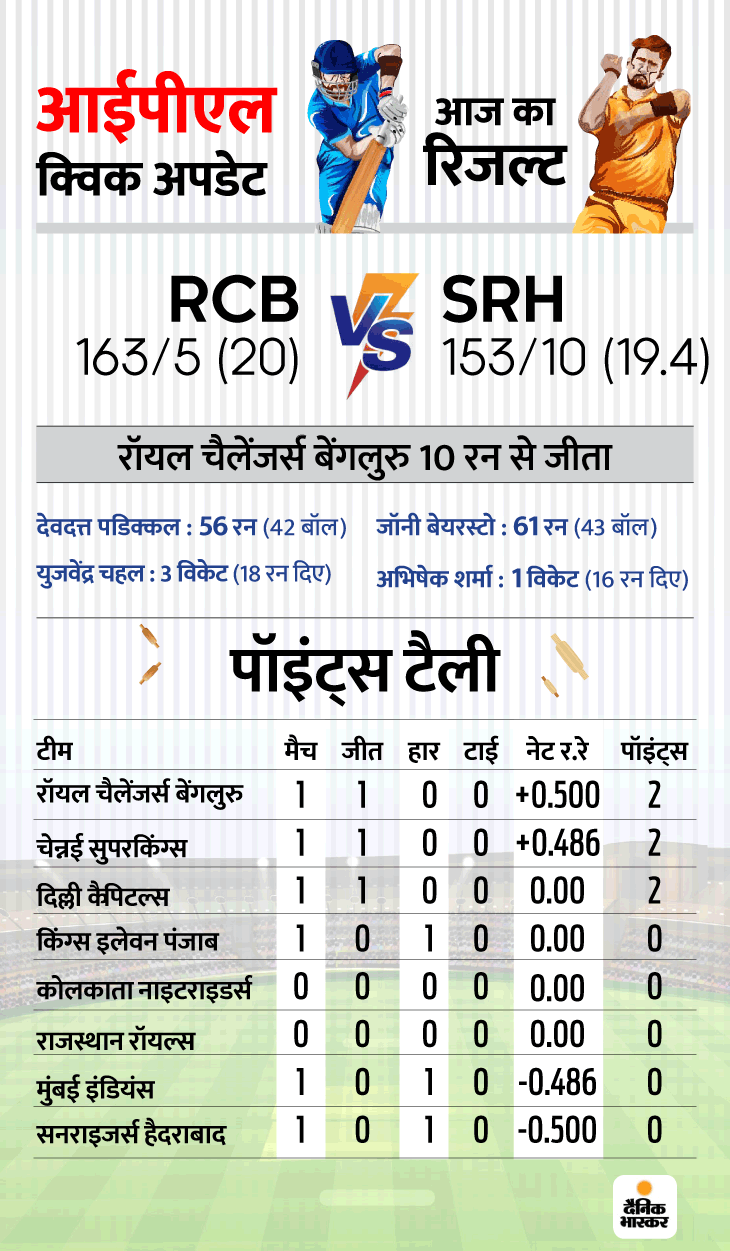 Royal Challengers Bangalore (RCB) defeated Sunrisers Hyderabad by 10 runs in their first match of the season. In reply to RCB's target of 164 runs, Hyderabad were all out for 153 runs in 19.4 overs. Virat Kohli became the fourth captain to win 50 matches to a team in the league. Before them, Mahendra Singh Dhoni has won more than 50 matches to Chennai Super Kings, Gautam Gambhir Kolkata Knight Riders and Rohit Sharma Mumbai Indians. Dhoni is the only captain to win 100 matches to CSK. Click here to see the scorecard of the match …

The hero of RCB's win was spinner Yuzvendra Chahal, who took 3 wickets for 18 runs. He dismissed in-form Sunrisers Hyderabad's Johnny Bairstow and Manish Pandey. Both had a 71-run partnership for the second wicket, which Chahal broke. This was also the turning point of the match. Chahal made Vijay Shankar clean bold without opening an account.

Performance of the most expensive and cheap players in a match
Kohli (17 crores) was the most expensive player in the match. They did not contribute much to the team's victory and they were able to score only 14 runs off 13 balls. The cheapest players for RCB were Devdutt Pallikal (20 lakh) and Josh Philip (20 lakh). Padikkal scored 56 off 42 balls in his debut match, while Philip remained unbeaten on 1 run.

At the same time, the most expensive player in the Hyderabad team was Captain Warner (12.5 crore). He scored just 6 runs and kept running at the hands of Umesh Yadav. While the cheapest player in the team was T. Natarajan (40 lakh), who took his first wicket in the debut match as Virat Kohli. He took 1 wicket for 34 runs in his 4 overs.

Bairstow could not win Hyderabad despite three lives
Hyderabad started off chasing a 164-run target and had a very poor start. Captain David Warner was runout after scoring 6 runs. Johnny Bairstow (61) and Manish Pandey (34) handled the innings, but could not win the team. Bairstow also received three lives in the match. RCB fielders left Bairstow's catches on personal scores of 40, 44 and 60.

The 8 batsmen of Hyderabad could not even touch the figure of ten. The team was reduced to 153 runs in 19.4 overs. Chahal took 3 wickets for RCB. Apart from these, Navdeep Saini and Shivam Dubey got 2-2 wickets. Dale Steyn took one wicket. Two Hyderabad players Warner and Abhishek Sharma were runout. 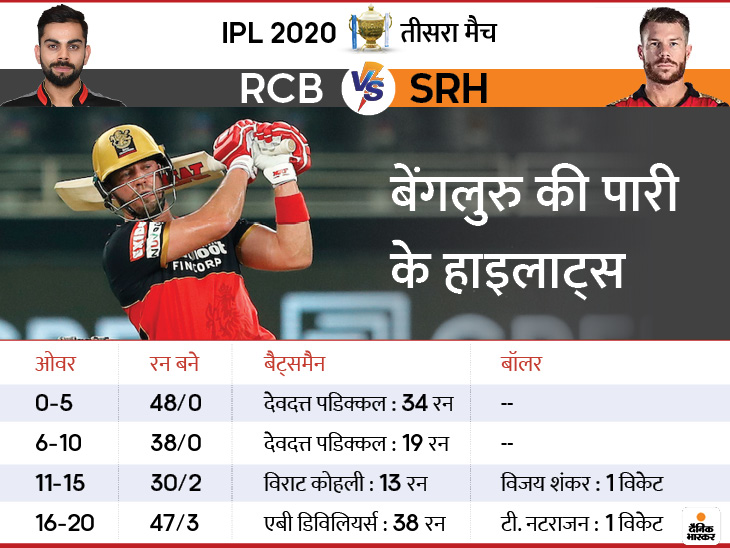 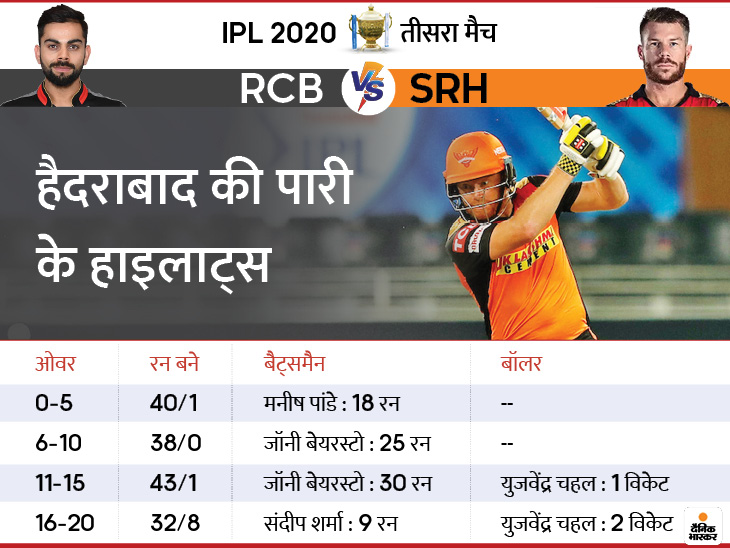 Devdutt made his debut in debut match, RCB scored 163 runs

RCB's Devdutt Padikkal played the highest score of 56 runs while playing a debut match in the IPL. He had a 90-run opening partnership with Aaron Finch (29). After this, AB de Villiers (51) was runout after putting his 34th fifty in the league. Thanks to these fine innings, RCB scored 163 runs for 5 wickets. At the same time, Hyderabad's Vijay Shankar, T. Natarajan and Abhishek Sharma got 1-1 wickets.

Fast bowler Marsh is out injured

The fifth over of the first innings was done by Hyderabad fast bowler Mitchell Marsh. It was his first over, in which he was out injured. He had bowled just 4 balls. The remaining 2 balls were done by Vijay Shankar, giving 10 runs with 2 no balls.

Kane Williamson did not get a chance in the first match

Hyderabad won two IPL titles, Bangalore could not open account
Sunrisers Hyderabad have won the IPL title twice so far. Under Warner's captaincy, the team defeated RCB by 8 runs in the 2016 final. Earlier in 2009, Hyderabad had won the IPL title under the captaincy of former Australian wicketkeeper Adam Gilchrist. The team was then named Deccan Chargers. In 2013, Sun TV Network bought and renamed the team. At the same time, RCB has been runner-up three times (2016, 2011, 2009).