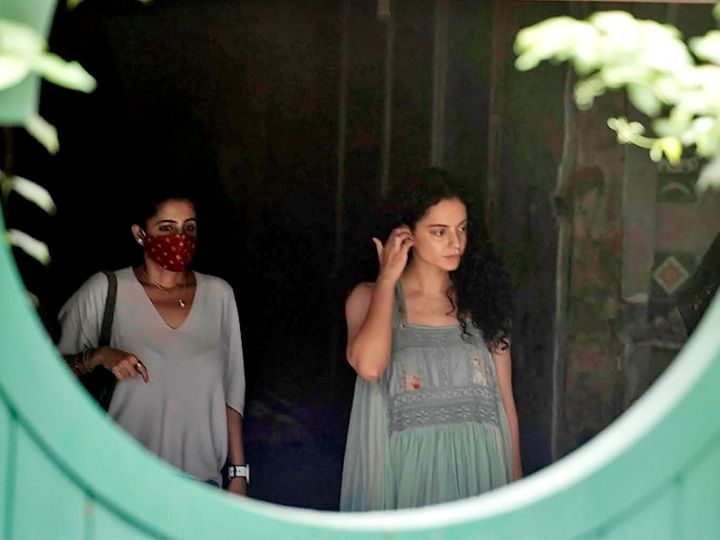 Kangana Ranot reached her office in Pali Hill on Thursday. She stayed here for about 10 minutes. On Wednesday, BMC dropped the illegal construction in their office.

The Maharashtra government has ordered an inquiry against Kangana Ranot on Friday in the drugs case. The Crime Branch of the Mumbai Police will be investigated on the orders of the state Home Ministry. Maharashtra Home Minister Anil Deshmukh had indicated this on Tuesday itself. He had said that the crime branch study would investigate Suman's allegations in which he had said that Kangana had taken drugs.

Deshmukh said that the study was in a relationship with Suman Kangna and he alleged this in an interview. Following this statement by Deshmukh, Shiv Sena MLA Pratap Sarnayak sent a letter regarding the allegations of study in the Home Department. After this, the ministry has ordered the police to investigate.

Former Maharashtra Chief Minister Devendra Fadnavis targeted the state government on Friday after Kangana Ranot's office was demolished. Fadnavis said that Dawood Ibrahim's house is not demolished, while Kangana's house is being demolished.

NCP Chief Sharad Pawar said that the Maharashtra government has nothing to do with the action taken at Kangana's office. This action has been taken by BMC. Meanwhile, Union Minister and RPI Chief Ramdas Athawale has met Maharashtra Governor Bhagat Singh Koshyari. Athawale has demanded compensation from the Governor.

Actress Kangana Ranot tweeted three on Friday on the action taken at her office. In the first tweet, she wrote – Sonia Gandhi, as a woman, you are not saddened by your government's treatment of me in Maharashtra? Can you not appeal to your government to follow the principles of the Constitution made by Dr. Ambedkar?

In another tweet, he said- You (Sonia Gandhi) have grown up in the West. She lives in India. You know the struggle of women. When your own government is harassing women and making fun of law and order. In such a situation, history will determine your silence and apathy. I hope you will interfere in this matter.

Dear respected honourable @INCIndia president Sonia Gandhi ji being a woman arn't you anguished by the treatment I am given by your government in Maharashtra? Can you not request your government to uphold the principles of the Constitution given to us by Dr. Ambedkar?

In a third tweet, Kangana Ranot, on a TV interview, said on Friday, "Mahan Bala Saheb Thackeray is one of my favorite icons, his biggest fear was that someday the Shiv Sena will form a coalition and form Congress." I want to know what is his conscious spirit in view of his party's position today?

Bala Great Saheb Thakeray One Of My Most Favourite Icons, His Biggest Fear Was Some Day Shiv Sena Will Do Gutbandhan And Become Congress @INCIndia I Want To Know What Is His Conscious Feeling Today Looking At The Condition Of His Party? pic.twitter.com/quVpZkj407

The actress has the third major statement on the Shiv Sena in four days. Earlier he had said that Shiv Sena has become Sonia Sena. Then on September 9, he said that Uddhav Thackeray! Today my house is broken, tomorrow your pride will break, this is the wheel of time, remember.

Kangna has another dispute

Kangna came to Mumbai on 9th. The same day BMC dropped the alleged illegal construction of Kangana's office. His office is in Pali Hill area of Bandra. It was built after spending 48 crores. This action is now being heard in the High Court.

Meanwhile, another controversy has arisen with Kangana. Not directly but this controversy is about the coverage of the media. Kangana arrived in Mumbai from Chandigarh on the 9th Indigo flight. During this time, the media did photography and videography on the flight itself. DGCA has sought an answer from Indigo on this.

I had my office opening on 15th Jan, shortly after corona hit us, like most of us I haven't worked ever since, don't have money to renovate it, I will work from those ruins keep that office ravaged as a symbol of a woman's will that dared to rise in this world #KanganaVsUddhav https://t.co/98VnFANVsu

Process to investigate Kangna's drugs case started
The Maharashtra government has ordered an inquiry into Kangana's drugs case. According to information received from the Home Department, a letter has been sent to the Mumbai Police. In this, the Mumbai Police now has to decide whether the crime branch will investigate the matter or be given to the Narcotics Bureau. Earlier in the monsoon session of the assembly, Shiv Sena MLA Pratap Sarnaik demanded an inquiry. In response, Home Minister Anil Deshmukh assured to conduct an inquiry.

Two players who became mothers for the first time played the semi-finals of Grand Slam, after winning, Azarenka said – I and Serena will inspire other mothers