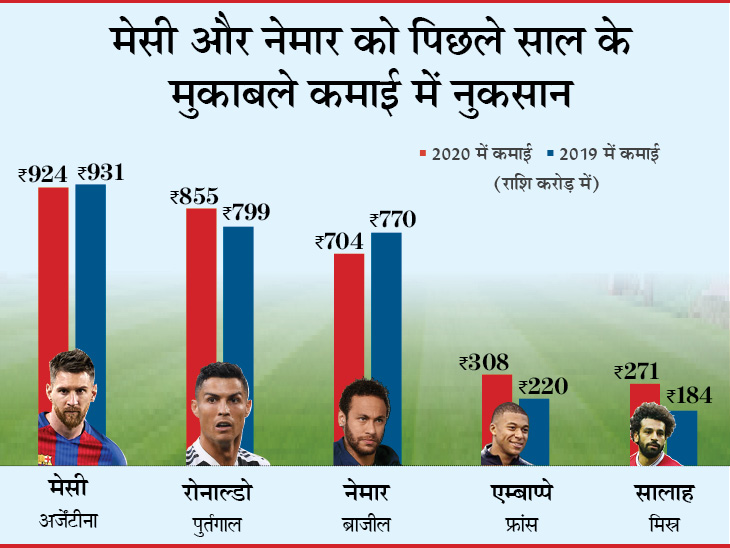 Sports magazine Forbes has released the list of highest-grossing footballers in 2020. In this, Argentina's Lionel Messi is on top for the second consecutive year with earnings of $ 126 million (about Rs 924 crore). Due to Corona, he has earned less than Rs 7 crore compared to last year.

At the same time, Portugal's Cristiano Ronaldo is second with earning of $ 117 million (about 858 crores). However, his earnings among Corona increased by Rs 59 crore over the previous year.

Mbappé's earnings increased by 88 crores
This time France's Kylian Embape (21) has shocked everyone. They have made it to the top-5 for the first time. Last year, he was at number 7 with earnings of $ 42 million (about 220 crores). Their earnings have increased to Rs 308 crore in 2020.

Neymar also lost due to Corona
Corona has also been hit by Brazilian star player Neymar Jr.'s earnings. He holds the third position for the second consecutive year with a gross of $ 96 million (about Rs 704 crore). Whereas he earned Rs 770 crore last year.

Salah jumped 7 places to number 5
Egypt's Mohammad Salah has jumped 7 places among Corona with a bumper earnings of $ 37 million (about Rs 271 crore). They have reached number 5. The star player of English football club Liverpool has earned Rs 87 crore more than last year.

Federer holds top among overall players
Four months ago, four months ago released the list of world's highest-grossing players in the 2019-20 season. Switzerland's tennis star Roger Federer was on top with earnings of $ 106.3 million (about Rs 802 crore). He left behind Messi and Ronaldo.

Kohli alone in top-100 Indian
Talking about Indians, only Virat Kohli is in the top-100 alone. Kohli, the captain of the Indian cricket team, is at number 66, earning $ 26 million (about Rs 196 crore).