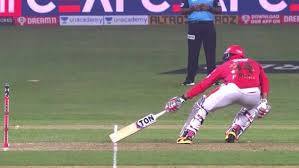 After giving a short run to Mayank Agarwal's single, umpire Nitin Menon has been criticized on social media. It is clear that his bat was inside the crease. This short run could have happened only if their bat was just above the crease.

The second match of IPL was exciting. In the match played in Dubai on Sunday, Delhi Capitals defeated Kings XI Punjab in the Super Over. In the 19th over of the match, a run by Mayank Agarwal was called short run by umpire Nitin Menon. Former cricketer Virender Sehwag called the umpire Nitin Menon's decision wrong. Other cricketers, including Mohammad Kaif, have expressed their opinion. Kings XI Punjab also appealed to the match referee regarding the matter.

Preity Zinta tweeted – 5 times she smiled even after getting corona test, but sad to see Mayank Agarwal's run short.

I traveled enthusiastically during a pandemic, did 6 days of quarantine & 5covid tests with a smile but that one short run hit me hard. What's the point of technology if it cannot be used? It's time @BCCI introduces new rules. This cannot happen every year. #DCvKXIP @lionsdenkxip https://t.co/uNMXFJYfpe

Sehwag said in the tweet- It was not a short run. He snorted, "I am not happy with the man of the match." It should be awarded to the umpire giving the short run. "

I don't agree with the man of the match choice. The umpire who gave this short run should have been man of the match.
Short Run nahin tha. And that was the difference. #DCvKXIP pic.twitter.com/7u7KKJXCLb

Former cricketer Akash Chopra also tweeted that it was not a short run. It should have resorted to technology. What would happen if Kings XI Punjab could not reach the final four by just 2 points?

One short that was not. Technology must take over in these cases ….. but that's possible if only the third umpire spotted it in time. What if #KXIP don't make it to the final four by 2 points ?? Tight # IPL2020 is likely to be … https://t.co/juCLU375jg

Mayank Agarwal's first run in the 19th over was declared as short run.

Batting first, Delhi Capitals gave a target of 158 runs to Kings XI Punjab. Punjab had a very poor start chasing the target. Half the team had returned to the pavilion on 55 runs. At the same time, opener Mayank Agarwal held one end. In the 19th over of the match, Mayank Agarwal went out of extra cover while taking his first run. Field umpire Nitin Menon gave it a short run. This over was also Kagiso Rabada's last over.

Delhi defeated Punjab in Super Over

Marcus Stoinis was man of the match, scoring 53 runs.

Batting first after losing the toss, Delhi had a very poor start. The team had lost 3 wickets for 13 runs. After this, Rishabh Pant (31) and captain Shreyas Iyer (39) shared a 73-run partnership for the fourth wicket. Finally, Marcus Stoinis scored 53 runs off 21 balls to bring Delhi's score to 157 for 8 wickets. Stoinis was voted man of the match.

Kohli the fourth captain to win 50 matches to the same team in the IPL; Chahal, hero of victory, dismissed 3 players including Bairstow