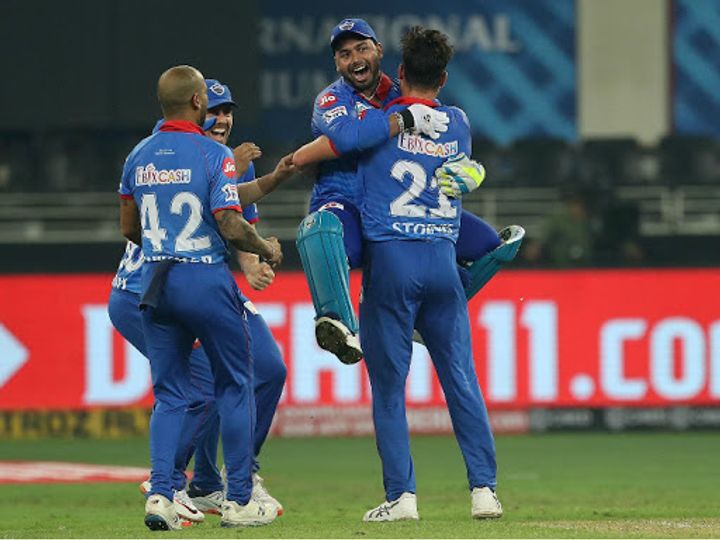 Delhi Capitals won their first match of the season.

The second match of IPL was exciting. The Delhi Capitals and Kings XI Punjab matches were played in Dubai on Sunday and Delhi defeated Punjab in the Super Over. Kagiso Rabada was the hero of Delhi's victory. He took 2 wickets for just 2 runs in the super over. Punjab scored just 2 runs in the super over. It was the smallest score of a super over in the IPL. Delhi won the match by scoring 3 runs in 2 balls. Click here to see the scorecard of the match …

Prior to this, the record of giving the lowest 6 runs in Super Over is to Mitchell Johnson and Jaspreet Bumrah. Johnson set this record against Rajasthan Royals in 2015 and Bumrah in 2017 against Gujarat Lions. 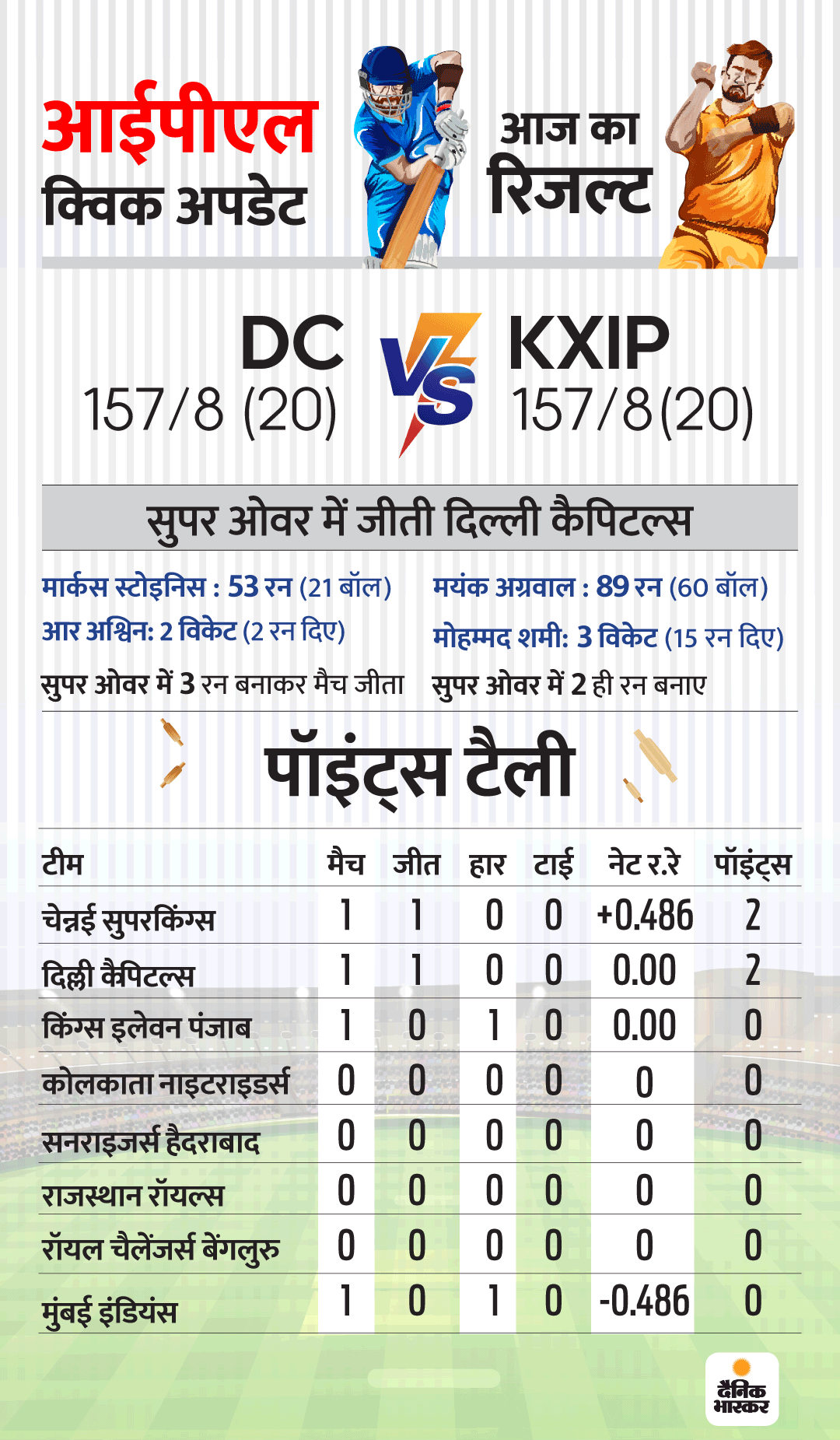 Mohammad Shami did superover for Punjab

At the same time, Captain Lokesh Rahul (11 crore), the most expensive player for Punjab, could not do anything special in the match and was dismissed by 21 runs. He hit 2 fours and a six. Sarfaraz Khan (25 lakh), the team's cheapest player, could score only 12 runs.

Punjab could not score 1 run on the last ball
Punjab had a very poor start chasing a target of 158 runs. Half the team had returned to the pavilion on 55 runs. At the same time, opener Mayank Agarwal kept one end, but could not win. Punjab needed a run to win the last ball of the match, but Chris Jordan, who was on strike, was runout. The last over of the second innings was done by Stoinis.

Stoinis smashed 53, also being man of the match.
Batting first after losing the toss, Delhi had a very poor start. The team had lost 3 wickets for 13 runs. After this, Rishabh Pant (31) and captain Shreyas Iyer (39) shared a 73-run partnership for the fourth wicket. Finally, Marcus Stoinis scored 53 runs off 21 balls to bring Delhi's score to 157 for 8 wickets. Stoinis was voted man of the match. 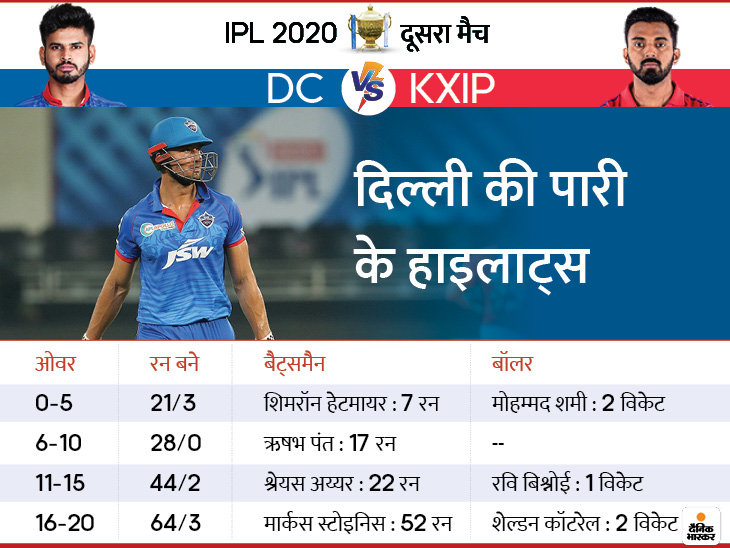 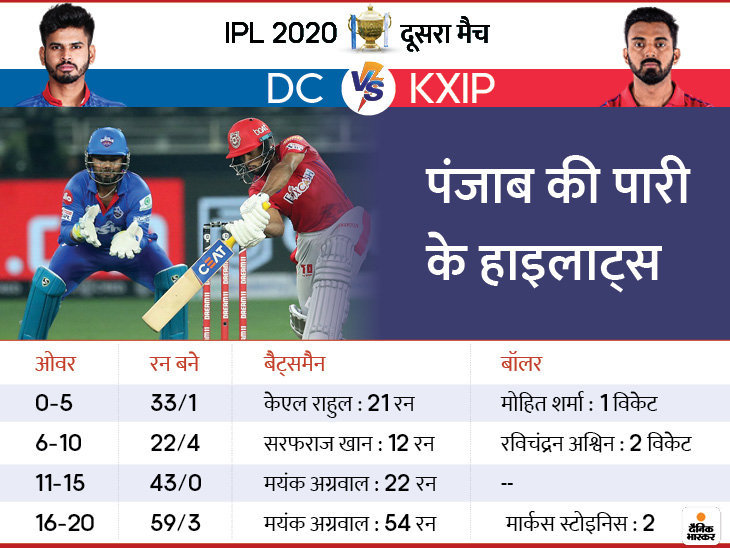 Chris Jordan conceded 30 runs in the last over of the first innings
Chris Jordan did the last over for Punjab. In this, Delhi scored 30 runs. Stoinis hit a six on the first ball of this over. The next ball was wide. After this, 3 fours were hit on 3 consecutive balls. Stoinis hit a brilliant six off the fifth ball of the over. Jordan bowled a no-ball at the last ball, but Stoinis was runout as he took a second run. Nortje scored 3 runs on the last ball of the over.

Bishnoi took 1 wicket in debut match
Mohammed Shami took the most 3 wickets in the first innings. He sent Shimron Hetmyer (7), Prithvi Shaw (5) and Shreyas Iyer (39) to the pavilion. Ravi Bishnoi and West Indies bowler Sheldon Cottrell, who performed brilliantly in the Under-19s, played the IPL debut match for Punjab. In this, Ravi got 1 and Cottrell got 2 wickets. At the same time, Enrich Nortje of Delhi also played his first match of the league. 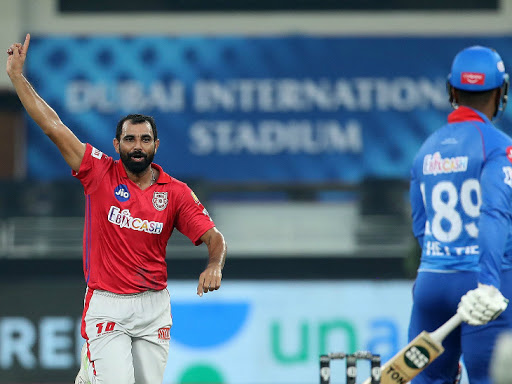 Shami took more than one wicket in the power-play for the first time.