The BMC on Wednesday demolished a part of actress Kangana Runot’s office in Pali Hill Raid. Kangana reached her office on Thursday.

Kangana Ranot made a new claim the day after she broke her office in Manikarnika Films. Kangana responded to a tweet saying that BMC had sent a notice in 2018 to her DB Breeze flat and not to the bungalow at Pali Hill, whose “illegal” part was demolished by BMC on Wednesday.

Kangana said that the issue was about the entire building and it should have been resolved by the builder. This building belongs to Sharad Pawar. We bought this flat from their partner, so they are responsible for it, not me.

When NCP President Sharad Pawar was asked about this, he said in a sarcastic manner that it is my wish that someone write a building in my name. Now the question is who are we expecting to talk responsibly. However, there is no truth in his claim.

Kangana reached to see her office

Kangana Ranot arrived to see her broken office in Pali Hills on Thursday. He was accompanied by his sister Rangoli. Kangna stayed here for about 10 minutes. The BMC has filed its reply in the Bombay High Court on Thursday in connection with the demolition of the office. After this, Kangana’s lawyer asked the court for some time. The case will now be heard on 22 September.

Kangana arrived in Mumbai from Himachal on Wednesday. Even before this, BMC had taken action to remove illegal constructions in Kangana’s office Manikarnika Films in Pali Hills. Kangana went to the High Court against this and the court stayed the action. 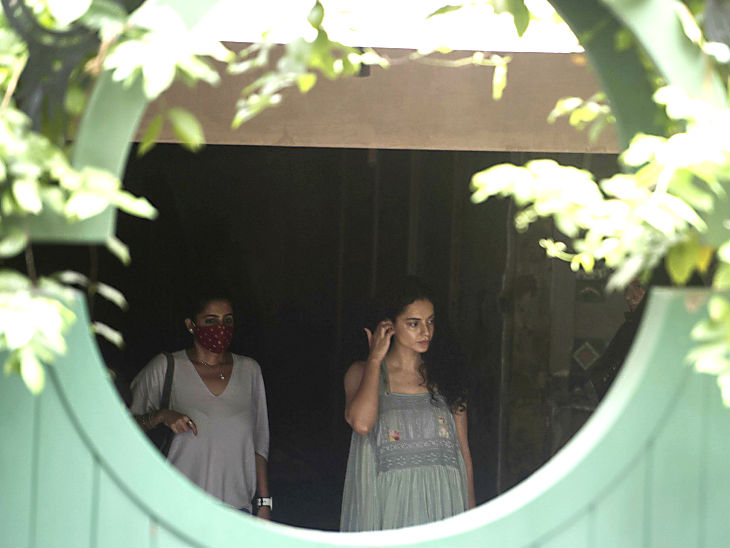 Complaint against Kangana in case of comment on Uddhav

Complaint was filed against Kangana at Vikhroli Police Station. Complaining lawyer Nitin Mane accused Kangana of using objectionable language for CM Uddhav Thackeray and forging links with the ‘Bollywood mafia’ to discredit him. In a video message on Wednesday, the actress had said the first offensive word before the CM’s name. 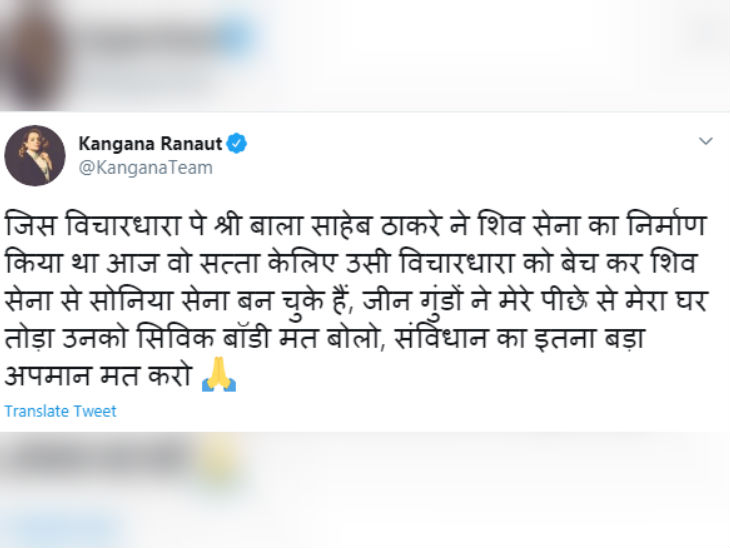 Your father’s good deeds can give you wealth, but you have to earn respect, you will shut my mouth, but my voice will echo in a hundred millions after me, how many mouths will you shut? How many voices will you press? Till when you will run away from the truth, you are nothing but a sample of dynasty.

I especially want to make it clear that the people of Maharashtra condemn the hooliganism done by the government, many calls are coming from my Marathi well-wishers, the sadness in the heart of the people in the world or Himachal Pradesh. Do not think that I do not get love and respect here.

Meanwhile, Kangana’s sister Rangoli arrived to take stock of the vandalism at the Pali Hills office. It is being told that Governor Bhagat Singh Koshyari has summoned the reply of the Chief Minister’s advisor in this matter. They can also send the report of this action to the center.

Earlier on Thursday, Kangana’s counsel had argued in the court that the BMC’s action was illegal, arbitrary and malicious. The High Court directed the BMC to file a reply on the petition challenging the order of breach on September 9. By the time the stay order of the court came on Wednesday, a large part of Kangana’s office had been demolished.

BMC’s double attitude surfaced
A ‘show cause notice’ was issued on Monday for illegal construction on the bungalow of fashion designer Manish Malhotra before Kangana’s office was demolished. BMC gave him 7 days and Kangana was given only 24 hours. The notice also mentions illegal construction in Malhotra’s bungalow.

NCP chief Pawar said – There are many illegal constructions in Mumbai
BMC’s action seems like a reverse bet on the Shiv Sena government. Congress and Nationalist Congress Party (NCP), partners in Shiv Sena’s coalition government in Maharashtra, have overcome this controversy. NCP president Sharad Pawar said the BMC action has unnecessarily given Kangana a chance to speak. There are many other illegal constructions in Mumbai. It is necessary to see why the authorities took this decision.

Demand for President’s rule on the pretext of Kangana

The demand for President’s rule in the state is now being raised as the basis for the case of Mumbai’s Kangana office being vandalized. Shweta Singh Kirti, sister of actor Sushant Singh Rajput and Saryu Rai, MLA from Jharkhand’s Jamshedpur East, have demanded imposition of President’s rule. The actor’s sister tweeted, “Oh my God! What a goon raj. This kind of injustice should not be endured at all. Can President’s rule be the answer to this injustice? Let’s establish Ram Raj again.”

Saryu Rai has described the action of BMC as Jungle Raj. Also demanded to impose President’s rule in Maharashtra.

The way the house of Kangana Ranaut has been broken into has proved that the jungle is secret in Mumbai. The government of Maharashtra is speaking of the Mawalis and Mafias. The Constitution and the rule of law is over. There is no protection of the property and property of the citizens. is. @narendramodi President’s rule in Maharashtra.

Kangana while advising PM Modi on the agriculture bill, said- Who will make the gold acting, what will be the difference with your explanation?