The game ended on the third day, West Indies scoring 10/2, England scoring a target of 399 runs; A step away from the Broad 500 Test wicket

England have a target of 399 runs in front of West Indies in the last match of the series of 3 Tests. By the end of the third day of the Manchester Test, the West Indies have scored 10 runs, losing 2 wickets in the second innings. The team’s crags Brathwaite 2 and Shai Hope are 4 not out. The Windies need 389 runs in two days to win the match, while England have to take 8 wickets.

Earlier England had scored 369 runs in the first innings. In response, the West Indies team could manage only 197 runs, giving the English team a lead of 172 runs. In this context, England declared the second innings by scoring 226 runs for 2 wickets, and set a target of 399 runs on the third day of the match. 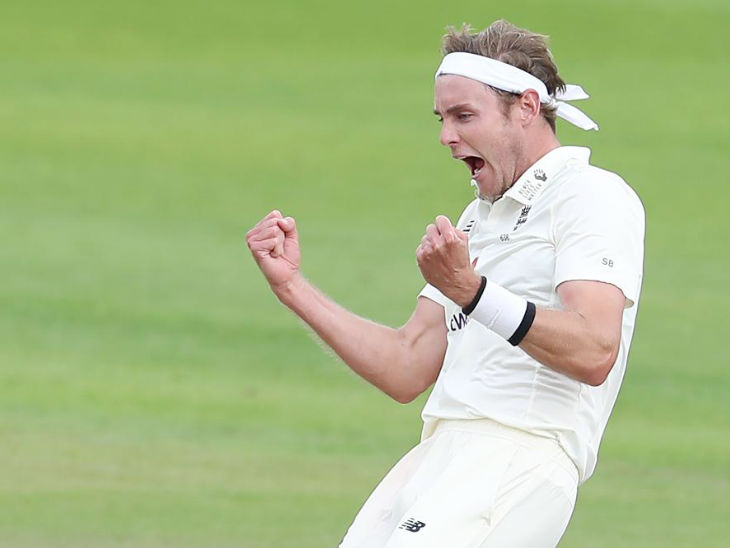 Stuart Broad is one step away from 500 Test wickets.

The start of the second innings of the West Indies was very poor. The team had lost two wickets for 6 runs. First John Campbell opened the account without being caught out by Root. After this, Kemar Roach also got caught by 4 runs to wicketkeeper Jose Butler. Stuart Broad took both these wickets. With this, Broad has had 499 wickets in his Test career.

Sibli made both his career fifty and his lone century in this series.

In the second innings for England, opener Rory Burns scored 90 and Dom Sibley scored 56 runs. While Joe Root remained unbeaten after scoring 68 runs. Burns was caught by Roston Chase at the hands of wicketkeeper Joshua da Silva. While Sibley was LBWed by Jason Holder. This is the second half-century of Sibley’s Test career. He also had the first fifty in the first match of the same series. After this, in the second Test, he scored 120 runs, scoring the first century of his career.

Holder as captain, ODI and fourth bowler in the world to take 100-100 wickets in Tests
Jason Holder completed his 100 wickets in the Test as a captain, dismissing England opener Sibley in the second innings. He has become the world’s 9th cricketer to do so. At the same time, as the captain in both ODIs and Tests, Holder is the fourth player in the world to take 100-100 wickets. In both these cases, former Pakistan captain Imran Khan is on top with 187 Test and 131 ODI wickets. 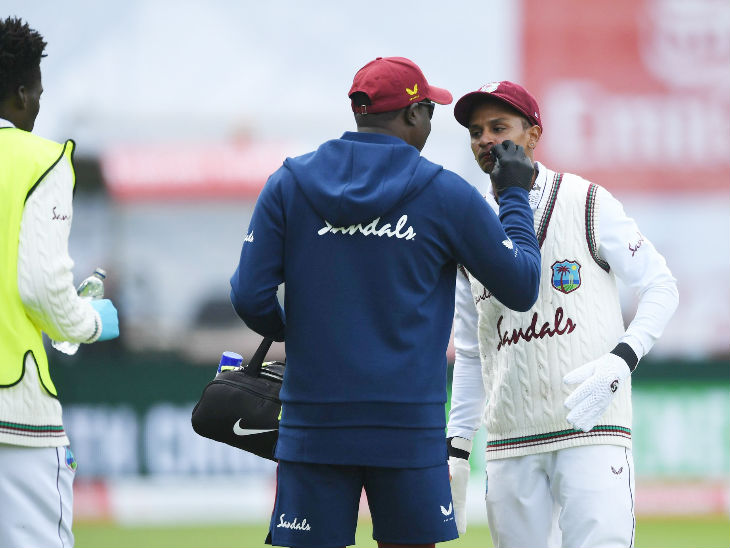 The ball hit Daurich’s lips. The umpire then sanitized the blood ball.

During England’s second innings, West Indies’ Shannon Gabriel’s third ball, putting the 8th over of the match, hit fellow wicketkeeper Shane Daurich. However, being leg ahead of the line, it was called a no ball, but the injured Daurich’s lips started to bleed. He was replaced by the wicketkeeping Substitute Joshua da Silva. The umpire sanitized the ball due to bleeding.

He becomes just the third player to complete the double of 2000 runs and 100 wickets in Tests for West Indies 🌴 #ENGvWI pic.twitter.com/DC66L4hSdc

Both teams equal 1-1 in the series

The series being played between Corona is tied at 1-1 between the two teams. In the first Test of the series, West Indies won by 4 wickets. While England played brilliantly in the second match and beat the Windies by 113 runs to equalize the series.

For the first time since March, the fans watched the match sitting in the stadium, 1000 spectators got entry in the friendly on Sunday

On Shekhar Gupta's allegations of interfering with the award function on Karan Johar, Amol Palekar said – 'What happened was in front and the same is true'

On Shekhar Gupta's allegations of interfering with the award function on Karan Johar, Amol Palekar said - 'What happened was in front and the same is true'